The Art Of Graffiti 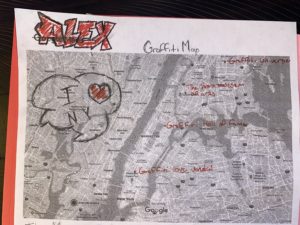 Although people detest graffitis practice due to its association with themes such as vandalism, rebellion, and criminal mischief, it is most often used as a means of self-expression. When it comes to the topic of graffiti, most of us will readily agree that it is in violation of the New York City law to mark public and private-owned property without authorization. Where this agreement usually ends, however, is on the question of if voices can be heard through this form of artistic expression then why should they be silenced? Whereas some are convinced that graffiti isn’t an art form, others maintain that it is important as it marks a place in Bronx culture, its rise in mainstream culture today, as well as its influence amongst the Bronx youth.

In their recent work Rebecca Solnit and Joshua Jelly-Shapiro authors of the book “Nonstop Metropolis A New York City Atlas” offer a lens into the South Bronx, and the issues that plagued the 1970’s as well as the connection to the uprise in South Bronx Graffiti. Graffiti has been ever present in the Bronx and it stems from the total economic collapse of the South Bronx during the 1970s that resulted in mass amounts of arson as well as elevated crime rate. This resulted in youth at the time to need an outlet of expression and “in that mess, kids found a way to achieve some measure of normalcy, remaking the landscape through a culture they would come to call hip-hop, creating beautiful, funky graffiti” (Solnit and Jelly-Shapiro Pg 119). Graffiti is one of the 4 aspects of hip-hop it was an activity that kept kids from being overwhelmed by all the unfortunate tragedy that was ensuing during that time. Just as important, it’s also stated that “kids–were going through an outburst of creative energy” (Solnit and Jelly-Shapiro Pg 130) this is important to acknowledge because with much negative influence around at that time there were positive outlets of self-expression and it kept kids away from destructive forms of expression such as the arson that was going on as well as crime. With the excess negativity that was ever-present in the 1970’s, there’s no doubt that graffiti was part of the reason that the Bronx youth were able to recuperate from the hardships that they had faced during that time, as well as solidified its importance to Bronx youth.

From legendary graffiti artist like Taki 183, Keith Haring, to even unknown street artist, every piece of art sprayed upon a surface in New York eventually culminated into what we see today in the streets of New York. In some cases, there are even stories that are told behind the art form, for example, Chalfant Henry and Cooper Martha authors of Subway Art state “Rivals Cross out each other’s names”(6). The essence of what is being said is there are usually deeper meanings to even the average graffiti art that you’d see walking around in New York. At first glance, people might say, “what if there isn’t any story to be told behind the art presented” but on closer inspection, there is still the process in which the graffiti got there which is often a tale to tell, authors Chalfant Henry and Cooper Martha iterate “The “writers” face many obstacles in pursuit of their goal”(6) this is in support of the fact that there is usually a story to be told even if it’s minor. As a result of the many untold stories that graffiti holds its significance to New Yorkers should be taken seriously, and due to graffiti’s coming of age into popularity it is doing so and sparking more discovery and interest.

The feast of street art that covers the Bronx landscape is not only vast in size, but presents an array of different experiences and stories that we’re told through the use of latex gloves, protective masks, and spray canisters, coming together to create expressive graffiti murals. There are deep connections between the Bronx and the history of graffiti and often the debate between whether or not it can be considered defacing or beautifying is traced back to sources in the Bronx. The PIX11 YouTube channel uploaded a video that goes into detail about a graffiti exhibit in The Bronx Museum of the Arts,

interviewing Deborah Colin who is the executive director of the museum talked about graffiti in the 1970’s starting  “it was formed in a particular sort of space and time in the Bronx… there was a lot of frustration and economic and social concerns”, consequently this shows graffiti in a positive light where it was used as a segway from the consumption of negativity that at the time was found in abundance. Another example of graffiti being used to integrate topics of relevance to art can be seen in some of Dondi Whites works, he was a very relevant artist of the 1980’s and is also in the graffiti exhibit in The Bronx Museum of the Arts, his most notable art being the “Children of the Grave” 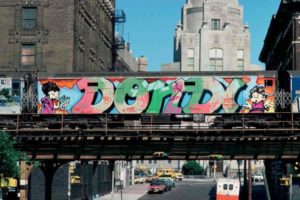 pieces he would spray paint on trains which was a depiction of what was going on during the time period between 1978 – 1980, 1980 being the worst year of crime in the city. Plainly put graffiti is apart of Bronx culture because it maintained a platform in the borough to continuously be a further expression of the eventful periods in the city’s history.

Graffiti to this day is considered defacement even tho it has public approval to be considered art by some and is even displayed as such in certain museums and galleries. With its deep-seated roots in the Bronx there’s no doubt it’s practice will still continue and with its continuation hopefully, it can be seen in a more positive light.