Gentrification and Displacement in the Bronx: Bronx Housing Crisis.

Despite the positive attributes of gentrification it is not without its disadvantages. The most notable of said drawbacks is housing, particularly affordable housing.  Finding economical feasible housing has been the main issue for people that live in the Bronx. According to the effects of gentrification on affordable housing it states ” gentrifying neighborhoods, consist of areas that had low-income from 1990 to 2014, and experienced rent growth above the median sub-borough area rent growth between the 24 years. This means that gentrification impacted neighborhoods for so many years and it precipitated low income residents in the community. This can be related to most people that are struggling in keeping up with not being poor. ” Bronx neighborhoods that were at the highest risk were the ones from Port Morris to Norwood while areas on the borough’s eastern and western edges–Riverdale, for example–were considered more secure.” This clearly means Port Morris and Norwood was the most to get hit with gentrification making it harder for people to live in good circumstances in that area.  The bad thing is that gentrification will keep evolving and will be hard for people to keep searching houses based on their income. Overall, gentrification has had a big impact on people that are low income which means that they are in greater risk of facing house displacement in targeted neighborhoods.

Gentrification can be done humanely and responsibly through protections. At this moment, there is a housing crisis in the Bronx stemming from urban revitalization that is causing a decrease in housing affordability and mass homelessness. In order to alleviate this situation, the following protective policies need to be put in place: constructing more affordable housing that’s income specific, revitalizing existing structure for low-income residents, rental limitation caps and regulations, and modest residential real estate opportunities. There needs to be a change in this system before it gets reaches to a point that people have to face displacements and affecting the way they used to live before. According to National Low Income Housing Coalition, it states “ baseline protections for the most vulnerable residents, producing and preserving affordable homes, non-market-based approaches to housing and community development, and approaches to community participation.”  This is proving that protections are needed for residents that struggle economically with special attention to housing security. There utilized resources source that relates to the protections needed during the gentrification process. A significant source is, a community land trust. The Mott Haven-Port Morris Community Land Stewards, establishes, acquires, and holds in perpetuity real property to ensure that community members preserve a stake in a neighborhood profoundly impacted by decades of environmental injustice and economic neglect and to promote pathways to meaningful self-determination.” This is showing that through this protective policy the south Bronx is making sure that residents live in good conditions as well as improving economic growth in the community. Substantially, having protective securities will definitely maintain people in safety standards and for people not to deal with gentrification in in the environment.

In conclusion, gentrification caused destruction for peoples lives making more complicated especially for those that live in residents for so long. Those who are able to remain in place will have to decide if they want to, and those who are unable to retain their locations will have to choose the next step. Throughout my experience living in the Bronx, I have seen areas and houses that look clean and nice but those are private houses which are expensive to purchase. I have lived in a basement apartment for several years with my family and we started to noticed that the rent was increasing. We decided to move out from the basement to another one due to the increase of rent my family couldn’t pay off. Other people came to rent the house so my parents and I had no other choice but to move out and to search for houses in the Bronx. Now that I live in an apartment the rent is not has bad compared to my living experience in the apartment basement. The neighborhood I’m in now Morrison Sound view is crazy because people are complaining about the rise of rent and the increase of displacements because of the place being gentrified. The neighborhood that I live in there is mostly Latinos and black people. The area is poor resulting that if gentrification do occur around the district people will definitely suffer consequences like moving out and their culture will get erased permanently. I know that is going to be difficult to face these issues because it will continue to keep going and is up for to corporations to make a change during times of housing crisis. I find gentrification really messed up because is ruining our lives and for people that just been new to the community. It will be better if gentrification did not occur making less it complicated for the ones that work with low income wages.  The most people that gets these problems are mostly people in color. The way I’m seeing things people don’t deserve this kind of suffrage mainly people that are owners and are living in the community for so many years. The crazy thing is that real estate don’t care about people they just keep control on peoples money and the benefits people receive.

1. What we don’t understand about gentrification | Stacey Sutton | TEDxNewYork 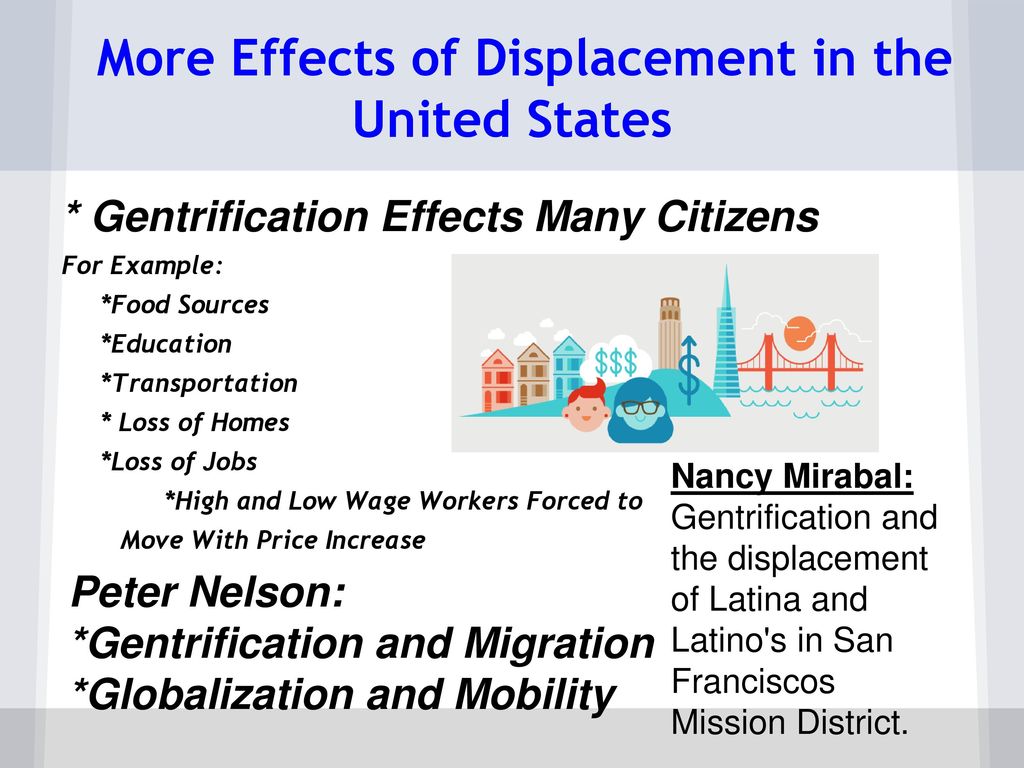 This image is indicating about the effects of gentrification and the risks people can face through this complicated movement. There are many effects that can impact on people referring to this picture the main one is displacement because people have to move out and the money they wasted for the house is all lost due to gentrification.