The South Bronx: From Rags To Million Dollar Piano District . 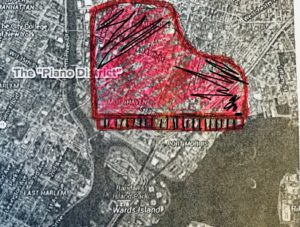 The Bronx has a rich cultural history and is home to some of the most vibrant communities in the City.it went under rapid growth during the turn of the twentieth century, as it residential development boomed and subway lines extended further South in the Bronx, making travelling to and from the inner borough of Manhattan more accessible. Thousands of Irish, Italian, French, German, Polish and Jamigrants left the bronx  and either migrated further South in the Bronx or left the borough entirely, leaving behind mostly Hispanic and African Aican populations. Essentially, the South Bronx went from being two-thirds non-Hispanic in 1950, to two-thirds black or Puerto Rican in 1960. While issues of poverty, crime,  unemployment are not unique to the bronx The Mott Haven area of the Bronx has caught the eye of property developers and businessmen, with film studio springing in the waterfront warehouses, and companies specialising in loft apartments snapping up land.

According to the 2015 BCD1  (Bronx Community District 1) Community Health profile, 72% of our community is Hispanic, 25% is Black and 2% is White. What’s more, 28% of our community is foreign born and 36% have limited English proficiency, and while some may say that the borough is not ready for major gentrification, developers argue that water front land of the mott heaven  has great potential for real estate opportunities, on the other hand  The South Bronx is, and has a history of being, one of the poorest neighborhoods in NYC. Crime, and drugs  in the borough is at a high compared to others . “We’re seeing more cameras faster — and more borough equity,” said Deputy Commissioner Phil Walzak, the NYPD’s top spokesman, and effort to ensure the public the the police is active in lowering the stats as written by The New York Times https://www.nytimes.com/2017/10/12/nyregion/bronx-heroin-fentanyl-opioid-overdoses.html .

According to https://datausa.io/profile/geo/bronx-county-ny the bronx has a median household income 10% of what some of the new propose apartment developments in the borough would cost. Owning one of these apartments will set you back 20-30% downpayment, not many of the renter in the bronx can become owners, I say this is the introduction to gentrification . Gentrification is a term used to describe what happens when lower-income neighborhoods receive massive levels of new investment, adding amenities, raising home values and bringing in new upper-income residents. This can lead to cultural displacement, when members of a racial or ethnic group who were longtime residents of gentrified neighborhoods are pushed out. The map shows some of the propose construction sites for the developments along the waterline, and the Group.

The Chetrit Group and Somerset Partners, the developers behind the Piano District and Port Morris waterfront development to bring thousands of market-rate luxury housing to the South Bronx, have sold their development for $165 million to Brookfield Properties according to The New York Post. This is the single most expensive transaction for a development site in Bronx history according to property records, and websites. With property values rising, a lot of the culture and bronx natives will be pushed out of the sll ready known “Lost Borough” , at least thats what some fear, and what studies have shown happens when gentrification happens.According to the New York Times https://www.nytimes.com/2018/09/14/realestate/the-bronx-is-great-thonx.html it is  being called the new Brooklyn, and it has many local residents fearing for their displacement, as they sit hopelessly while their borough gets auctioned off Piece By Piece.

In my experience i was born and raised in the bronx, and i plan on getting a piece of this auction. Myself  and many local bronx residents should be invested in the borough that we call home for decades personally  I don’t  believe in displacement of locals  because they are the culture and the blueprint when listening to the narrative , and ideology of a community .  The say this is the new piano district, and i say we are the ones that hold the true keys . When you ask a bronx native if they are aware of the proposed “Piano District”, many are unaware.

Small, Eddie. “This is what Brookfield’s South Bronx Megaproject Will Look Like.” TRD New York. https://therealdeal.com/2019/11/21/heres-what-brookfields-massive-south-bronx-project-will-look-like/