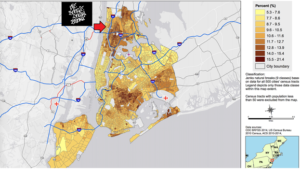 The Bronx – Home of Hip-Hop. The popular music genre was developed by inner-city African Americans and Latinos in the Bronx during the 1970s. The Bronx is not only known for its music, but also for the vast diversities of cultures, restaurants, neighborhoods and bridges. It is also the home of Yankee stadium. The Bronx is also known for its various highways, parkways, thruways and bridges that connect to Upstate New York, Queens, Manhattan, New Jersey and other states. In addition to all this, the Bronx is known for its high asthma rates. Although the traffic conditions of the South Bronx cannot be controlled, the impact of traffic in this location has led to an increase in pollution, causing asthma levels to rise.

Asthma is a lung disease that has affected approximately 16.4 million adults and 7.0 million children in the United States. Even though the exact cause of asthma is unknown, it can be treated with appropriate medical care and avoiding exposure environmental causes. According to the CDC (Centers for Disease Control and Prevention), in 2008, an estimated 1,293,638 adults in New York State had asthma and an estimated 475,303 children in New York State. According to a graph by Montefiore, asthma-related emergency room visit rates among adults are almost two-times greater than the rest of NYC. (Montefiore, Graph)

Studies show that 11-13% of the Bronx’s population consists of asthmatics, sometimes reaching up to 17% in certain regions. According to the CDC, the South Bronx is one of the two most asthma filled neighborhoods in New York City. The CDC also states that 10% consists of adults who are asthmatic and 8.5 % consists of children who are asthmatic. (CDC, Percentages)

The South region of the Bronx has been affected, due to the fact that it is located underneath three major expressways such as The Bruckner, The Major Deegan and Cross Bronx. The result of its location has led to poor traffic conditions that cause pollution to take its effect on adults and children of all ages and causing asthma levels to rise from it. With the increase in carbon monoxide from the cars, it has led to an increase in hospitalizations amongst the population mostly taking place in Melrose and Mott Haven. 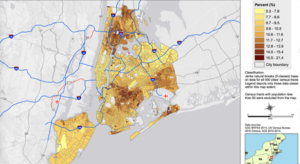 The map shown above depicts the percentage of adults with asthma in the US. The darker areas show higher concentration of people with asthma. The upper part of the map is where both pollution and asthma levels are most concentrated. It also shows various interstates in which one leads to an airport. As the planes pass by, it could be another cause in which why the South Bronx is also polluted. 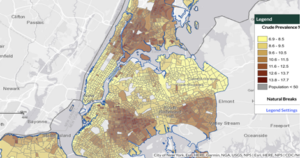 The second map depicts the percentage of people under the age of 18 in the US. It is depicted not only in  the upper part of the map but it’s evenly distributed to the lower left and right of the map. This shows children or people under 18 are more likely to have asthma than adults.

As an asthmatic person, I need to take care of myself. I have had asthma since I was a small child and many times I had to go to the emergency room to get treated. If  inhaling polluted air or carbon monoxide from cars, can cause severely damage your lungs and cause possibly in serious cases cancer.

I chose this source because it explains how pollution has affected the South Bronx. The author elaborates, explaining the reasons for higher pollution in the area,  and provides data on how many adults and children have been hospitalized. The article provides statistics from The New York City Department of Health showing that public schools had also been affected. Additionally, the author explains how this has mostly affected the African-American and Latino ethinic groups.

I chose this source because the CDC studies and measure all different kinds of diseases. They also update their site regularly to show how their research changes. This site explains how the CDC’s National Asthma Control Program helps Americans with asthma to achieve better health and improved quality of life. They offer programs and other resources to aid in learning about asthma and what can affect it.

HELLO  i was told to do this in class.

Relating to the Nonstop Metropolis map of “Trash in the city,” the author showed and explained thoroughly how much trash was exposed in the city and the different routes used for waste destinations. However, it didn’t really explain any potential negative effects on the people and communities. The “Trash in the City” map motivated me to study the asthma rates caused by pollution in the Bronx, specifically the South Bronx. I think it’s important to be responsible and take time to observe how pollution affects a specific area and how it affects people’s health. It is especially important for me because I am asthmatic and have family members who also have asthma. Additionally, my family and I reside and travel around the Bronx for school and work. I plan to do more research and study more this topic design my map to meet the criteria.