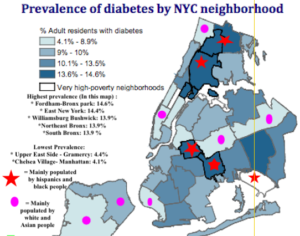 Growing up, I heard a lot about diabetes. Not only was I diagnosed with type one diabetes, but I also have many relatives who also have diabetes. When I was smaller I thought diabetes was an uncommon disease. But as the years have passed by, I now hear it constantly in the news, and I meet more people being diagnosed with diabetes as if it was a very common thing to have. Diabetes is a disease in which the pancreas does not produce enough insulin to control your glucose levels (blood sugar), this could either result because of genetics or it can be caused by one owns actions like having an unhealthy eating habit and being overweight. This disease has become very common now a days, which is very worrisome as well because this can be a very popular reason for deaths. Especially in the Bronx. You’d be surprised how easy it is to find someone who is diagnosed with diabetes. Why wouldn’t it be easy , when you can find a fast food restaurant at almost every block in the Bronx. Although there are many factors that may lead to the diagnosis of diabetes, fast food places is a reason why the rates of diabetes in the Bronx is rapidly increasing and should be limited.

Diabetes is a disease in which your pancreas does not develop enough insulin for your body. As a result, this causes for your glucose, blood sugar, to be higher than what it normally should be. Which is why people with diabetes must constantly keep track of their carbs, the amount of sugars in their food and the times they check their blood sugar and how much insulin they need to provide themselves with. Although genetics is one of the factors that can lead to the diagnosis of diabetes, there are many other factors that can cause diabetes and there are many versions of diabetes that one can be diagnosed with. Additionally, there are three types of diabetes that someone can be diagnosed with. According to the article, “What Are the Different Types of Diabetes?”, by Ann Pietrangelo, there’s type 1 diabetes, which “is believed to be an autoimmune condition. This means your immune system mistakenly attacks and destroys the beta cells in your pancreas that produce insulin. The damage is permanent.” There’s also type 2 diabetes, which “starts as insulin resistance. This means your body can’t use insulin efficiently. That stimulates your pancreas to produce more insulin until it can no longer keep up with demand. Insulin production decreases, which leads to high blood sugar.” And lastly there is gestational diabetes, which happens “due to insulin-blocking hormones produced during pregnancy. This type of diabetes occurs only during pregnancy.” There are also many causes of diabetes. In the article, “What Are the Causes of Diabetes?”by Vanessa Caceres, it states that the reason someone can have type 1 diabetes is because of their genetics but there can also be “an additional environmental factor may trigger an immune response that ultimately causes destruction of the insulin-producing cells of the pancreas”. Vanessa Caceres also states that type 2 diabetes is caused by a complicated interaction of genes and the environment. Gestational diabetes develops only during pregnancy and can affect the babies health. According to the article, “What Are the Different Types of Diabetes?”, it states, “About 30.3 million people in the United States have diabetes. About 5 to 10 percent have type 1 diabetes, while 90 to 95 percent have type 2 diabetes.” With rates this high, this shows that diabetes is a disease that can be considered as an epidemic which makes us think that there must be factors that are almost inevitable , but what is the rate of diabetes in the Bronx alone?

The Bronx is a culturally diverse borough, which means there’s all types of races and all types of food that you can eat. In fact, there shouldn’t be a reason you can’t find a place to eat in the Bronx because there will always be a restaurant or at least a fast food place you can order from in each block. But this could also mean that the Bronx is prone to have a large amount of people who are overweight or are diagnosed with diabetes. According to the article, “Diabetes in the Bronx: epicenter of an epidemic”, by James Palmer, it states, “The Bronx and New York City are positioned at the perilous front of the country’s escalating diabetes epidemic. According to a recent survey published by the New York City Department of Health, one in every three people in the borough suffers from diabetes. According to the American Diabetes Association (ADA), the number of Americans with the disease has climbed to 25.8 million — 8.3 percent of the population. That is still lower than the rate of the disease in the city at 10.5 percent”. It has been proven that The Bronx and New York City have been ranked to be one of the places in the country to have the highest rates of diabetes. But why does the Bronx have one of the highest rates of diabetes in the country? According to, “Diabetes in the Bronx: epicenter of an epidemic”, it states, “Diabetes is most prevalent among minority and low-income populations. To make matters worse, these people often have limited access to adequate health care. According to the city health department, diabetes is most prevalent among Hispanics and blacks, followed closely by Asians”. Additionally, according to the article “Five of The Worst Neighborhoods For Diabetes Are In The Bronx” written by Jennifer H. Cunningham From the Daily News, she explains that out of all the neighborhoods with the highest rate, Bronx has the most rates of death toll because of diabetes. Brownsville in Brooklyn is the highest with a death toll of 177 per 100,000 residents, followed by Mott Haven with 159 per 100,000. Next is East Tremont, with 134 deaths per 100,000, Highbridge with 131, Morisania with 130, and Hunts point with 117. This shows that diabetes is mostly popular among people who have low income, which is no surprise since the Bronx is considered to be one of the poorest boroughs of New York City and because of the poor income and not being able to afford having diabetes it ends up being a tragic death. Ultimately, this also shows that since the people in the Bronx have the lowest income in the city, they are also likely to buy food that is less expensive, which results in them buying cheaper unhealthy food, the fresh healthy food since it is in fact more costly to buy vegetables than it is to buy fast food.

If you live in New York, or more specifically in the Bronx, you know that the Bronx is filled with lots of culture and lots of diverse races and ethnicities. As a result of that there is a lot of diverse types of food you can order. There’s mexican restaurants, dominican restaurants, chinese restaurants, but there’s also the cheapest and the most popular of them all, fast food restaurants like McDonalds, Popeyes, Burger King and the list goes on. According to a video called “Fast Food, Fat Profits: Obesity in America” by a channel named Fault Lines, that in order for all these fast food restaurants to have all these foods available, they pay a large amount of farmers to grow a mass amounts of meat. At the same time portion sizes go up as well. This means that as a result of portion sizes going up, the amount of numbers of obesity and diabetes went up as well. Many people would say, “its their choice, they also have the choice to buy vegetables and eat healthy food as well”, but how is it possible in a borough that’s known to be the poorest of the whole city and on top of that the prices of healthy food in vegetables are very high. According to a data set of fruit and vegetable prices, provided by the “United States Department of Agriculture Economic Research Service”, the average retail price of fresh apples is $1.62 per pound, meanwhile you can get a large cup of soda at McDonald’s costs $1.00, or a large size fries for $1.00. The average price of fresh collard greens per pound is $2.63, meanwhile you can get 20 piece chicken nuggets for $4, which seems like a much better deal than paying $2.63 for one pound of collard greens which probably won’t suffice your hunger. Could you imagine paying about $20 get the ingredients you need to make a bowl of salad when you can simply get buttermilk crispy sandwich for $4.99. When you’re in an unstable financial state, you don’t have much choice of what to eat. The important thing is that you get to eat, no matter if it’s healthy or unhealthy. So of course, it’s not a surprise that the rates of diabetes are that high when corporations that make up the prices for vegetables and healthy food are putting them high, inevitably making the person have no choice but to buy what’s more affordable which is fast food.

* These data entires from the United States Department of Agriculture Economic Research Service shows the average retail prices of apples and collard greens in varied forms.

5) Palmer, James. “Diabetes in the Bronx: Epicenter of an Epidemic.” The Riverdale Press, 21 Aug. 2013, https://riverdalepress.com/stories/Diabetes-in-the-Bronx-epicenter-of-an-epidemic,52855?page=1.