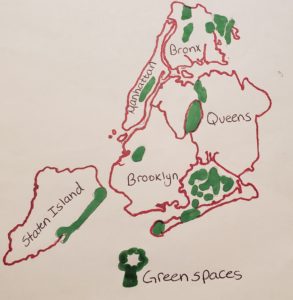 A reference map normally shows natural and human-made objects from the geographical environment with an emphasis on location. The map that I’m presenting is a reference map. Specifically, it covers the five boroughs of New York City and where the largest green areas are located. The color I’m using to represent these zones is green. Also, it is drawn by hand so I hope people can appreciate it. The map represents an important way of looking at the city because it specifies where are these important zones and also serves as a guide to see which areas are nearby hence people can visit it. Although there are few green zones in New York City, the benefits that they provide are really significant, showing us that there should be more green zones in the city.

Green belts facilitate physical activity and relaxation and form a refuge from noise. This video shows people talking about the importance of Central Park in NYC. People describe the park as a peaceful and relaxing place. Also, the views and connections through places are good qualities of the park. Moreover, a person is describing the park as the most amazing park to walk around to get away from the rush of the city. 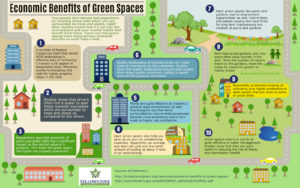 Green spaces such as parks and natural meadows, wetlands or other ecosystems, represent a fundamental component of any urban ecosystem. Blasco Jose in “Green New York” describes with geographic and historical information “the biggest ten green spaces in New York city called JIAs (joint of interest areas)” (Blasco 3). Central Park occupies 3.4km2 in Manhattan and Prospect Park with 2.4km2 in Brooklyn. Both parks have many things in common, they are the oldest urban parks (Central Park, 1858 and Prospect Park, 1867), and were born as an act of citizen will that claimed the creation of green spaces in the city. In the Bronx, Van Cortland park with 4.6km2 in the northeast, created in 1888. Bronx Park with 2.9km2 hosts two of the main New York equipment, The Botanical Garden and the Bronx Zoo and Pelham Bay Park is the biggest green space in the city with 11.2km2. In Queens, Corona Park was a landfill until Robert Moses proposed its generation as a park and Forest Park with 2.2km2 has a mission to preserve the wooded areas. Finally, The Gateway National Recreation Area is a special case, since under that denomination there are spaces of three New York boroughs, Jamaica Bay Unit covers Long Island, Brooklyn, and Queens. Staten Island Unit and Sandy Hook Unit in New Jersey.

Green areas provide vital health services as well as environmental services. In the article “Seeing green is Keen”, Wallis Laura provides significant information about the benefits of green spaces in people’s health. specifically, Wallis argues that “verdant spaces can lower rates of anxiety, depression, and other illness” (Wallis 2). Although the leafy spaces are few in New York City Wallis insists that there should be appreciated and preserved as they serve as therapy for people facing respiratory illnesses. In short, green spaces encourage exercise, provide spaces for socializing, decrease noise and air pollution, and improve immune function by providing exposure to beneficial microbiota. It also can help with psychological restoration meaning that green spaces provide a respite for over-stimulated minds.

However, does the evidence I’ve cited prove conclusively that green zones are really important for people’s well-being and economy? As a New Yorker, my greatest wish is that the city looks greener and my future children grow up in an environment surrounded by trees and places that reflect nature. Even though, the reality is that in New York there are very few green spaces compared to the size of the city. Let’s see the map to be aware of what is happening to our city and fight for the few remaining areas to be conserved since in the future these areas can be used for other purposes due to the increase of people in the city.

Built with WordPress | Protected by Akismet | Powered by CUNY