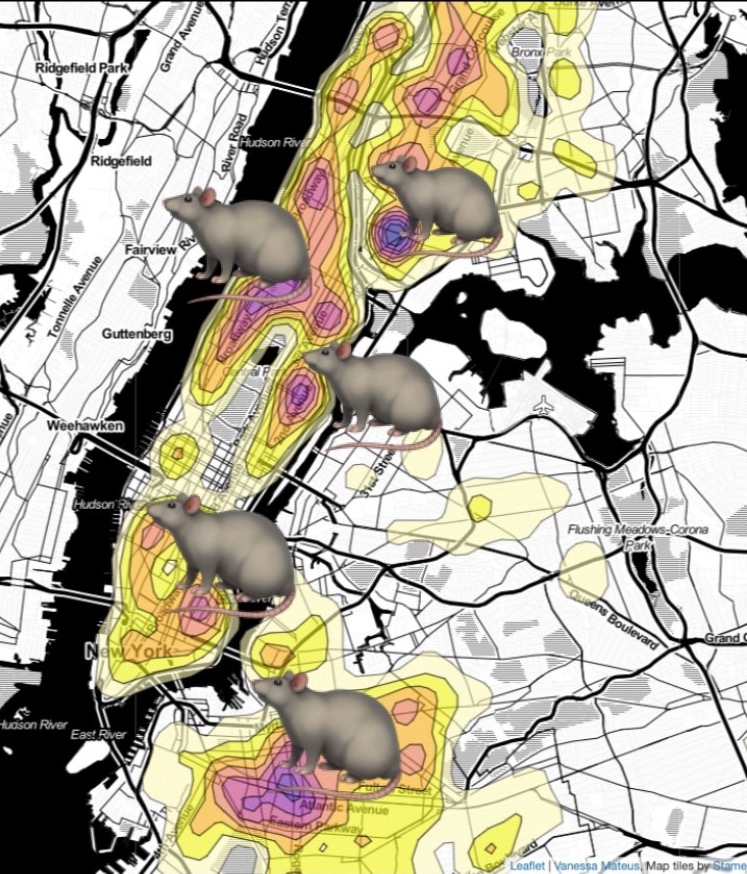 “Pizza Rat”, “Rat vs Pigeon”, “Escalator Rat”; to the untrained ear these might not ring a bell, but to a true New Yorker these heroes of modern social media are the new denominators in a stronger than ever exposure of the co existence with our little sewer friends, or in other words what’s turned into the new normal in New York City nowadays. But even to the outsider, the unsuspecting tourist who has not been familiarized to such extent, all three titles have an obvious connection, as rats are the main characters of these viral videos visited by millions. People tend to close their eyes if the ongoing problem isn’t directly relatable, and if so, you might be one of the lucky ones, living in an area that for one reason or another hasn’t experienced an uprise in rat populations. Or, you can be one of the affected parties that at this point has become desensitized by the daily rat exposure to such extent that you no longer see the vermin infestation taking over our habitats and therefor simply choose not to acknowledge it. But either way, one should know, based on common knowledge and historical facts of rats and megalopolises, that nothing good has ever followed after soaring rates in rat populations, and we can no longer sit and wait to see what the endgame holds for us. Although the city has been fighting the war on rats for centuries, rat populations have been rising drastically. That can be explained to some extent by research findings that show rats are extremely intelligent creatures, able to adapt to urban environments and flourish while doing so. Public health and safety must remain a priority of New York City’s institutions, and new methods and approaches ought to be tested and implemented so we the residents can be protected from this vermin outbreak before the next epidemic explodes and people’s lives are at stake.

“New York has attempted to eradicate its teeming rat population for 355 years and counting” (Freytas-Tamura). These words happen to be a true summary of the never ending battle that has been taking place in the city that never sleeps. In her article posted in the New York Times this year (2019),  Kimiko de Freytas-Tamura pins our attention with the years that went by in the war on rats in the city of New York. She then shocks the public by pointing out all major means taken to win the fight and declare victory, that unfortunately have proven inefficient through time, “Traps. Poison. Birth control. Dry ice.”  By simply conducting a Google search with  the words “rats” and “New York” one pulls up numerous articles by media moguls such as The New York Times and Forbes with recent takes on the problems the city has faced in its effort to minimize the rat invasion. By shedding light on the never ending war on rats and presenting us with some disturbing statistics and trends, one won’t be wondering why mayor Bill De Blasio launched a 32 million dollar war on the fluffy rodents. Adam Andrzejewski, a reporter for Forbes, teaches us a simple lesson with his extensive numeric data sum up of the current rat population trends around the city and that is – rats do not discriminate. They don’t choose their living quarters depending on racial biases or financial capabilities and even the rich neighborhoods fall under enemy fire: “The rats are running wild in this fancy area on the Upper West side of Manhattan. With the Hudson River and Central Park as borders, the area is home to the fraternities at Columbia University and many millionaires. In fact, the median home value is $934,000.”  Winnie Hu, a reporter for The New York Times digs deeper beyond the empirical presentation of the issue and presents us with more insights on why things appear as they do: “A major contributing factor is how the city collects trash: bags are left outside on the curb for hours before pick up the next morning. It’s just an all-night buffet for the rats.”  Of course trash can’t be the only culprit and as it does feed the issue, it can’t explain the reason why rats have become so outgoing and are so much more visible nowadays. She finds answers by looking into the work of a researcher from Columbia University where Simon H. Williams links overdevelopment and compares it to “stepping on an ants’ nest,” meaning that by bulldozing the city’s scarce landscape, we are literally forcing the rats out on the surface.

But maybe there is a reason the extermination techniques weren’t as efficient as expected. Maybe there is a missing link in the broad picture of rat eradication. The so called villain of this story is not just a rat. He is smart and he possesses true intelligence according to a study interview published in the Harvard Business Review. The article from 2015 written by Alison Beard grabs one’s attention via its bold statement leaving almost no room for plausible debate with the words: “Rats can be smarter than people.” By the title we already know who did better in the learning tasks tested in the aforementioned study and what the findings concluded. What’s surprising here is that these results were not expected, and the study’s initial participants were not of human kind but rats exclusively: “However, when we saw that the pattern of results did not match those found in similar human studies, we decided to add people to our study and create as direct a comparison as possible. We were really surprised by the results” (Beard). Without going into huge detail of the experimental process, the author shares how the work undertaken changed course, shifting the study on both rats and humans and their cognitive abilities as “the subjects were trained to distinguish between “good” and “bad” patterns and then tested on their ability to apply that know-how to new types of patterns.” In their website PETA points out more interesting findings about rodents in general and rats. As most humans genuinely experience feelings of dislike and even disgust towards these creatures, the organization fighting for animal rights gives us a few brief but educational bullets on what rats are capable of and what we might not be aware of. One of these mini shockers tries to, in a way, clear their names of the filth we associate rats with by shining light on their grooming habits and states that these fur balls are actually “fastidiously clean animals” and  that “if not forced to live in a dirty cage, a rat’s skin has a very pleasant perfume-like scent.” Other mesmerizing aspects unknown to the masses are the ability to demonstrate empathy, and also that rats posses complex communicational skills and are highly social animals, being compared to man’s best friend – the canine.

Nevertheless rats are a known health hazard and need to be dealt with. By looking back at the article we have started this journey with, we can find hope that there is still some light at the end of the tunnel as the city is not just giving up, instead it is actively deploying new ways of combating the vermin apocalypse. A new strategy is being developed as we speak, and the city is preparing for live tests of the so called “mystery bucket”: “in effect, a bucket that would lure the rodents and send them plunging to their deaths in a mysterious vinegary concoction. The toxic potion, according to its maker, Rat Trap Inc., prevents them from rotting too quickly and emitting a stink” (Freytas-Tamura). And the reasons we must keep on fighting this never ending battle can be found on CDC’s (Center for Disease Control and Prevention) website. It has a dedicated page on not only direct but also indirect ways of contracting serious diseases from rats and on numerous protocols for exposure prevention and clean up measures. The list is staggering and might even seem fear mongering, but it sure is no joke. Here are some of these exotic sounding diseases that can ruin one’s life: “Hantavirus Pulmonary Syndrome; Hemorrhagic Fever with Renal Syndrome; Lassa Fever; Lymphocytic Choriomeningitis; Plague.” These are only a few of the direct illnesses that a rat can “gift” a person; but let’s not stop here and continue the scare with the indirect ones transmitted by our undesired neighbors: “Colorado Tick Fever; La Crosse Encephalitis; Lyme Disease; Murine Typhus; Rickettsial pox; West Nile Virus.” All of these are, if not lethal, extremely life impairing conditions, and if that doesn’t motivate one to diminish the population of rats in this city, nothing else will.

But wait a sec, didn’t we just emphasize how intelligent and empathic rats are? Can’t we find another solution? The issue is, although these statements are correct in their core, we can not just simply stop the efforts in limiting or trying to eradicate a sort of epidemic that has been escalating over and over through the years. There is a reason behind this desire for rat extermination and that is public safety. All these diseases are not just hypothetical, they are real and they are just one rat bite away, one contact with vermin feces or urine away, and the more their population rises the higher the chances of an actual epidemic outbreak there are. Living in a megapolis sounds like a fairytale to many, yet it comes at a price that most don’t include in their math equation – sharing your living space with rats on a daily basis. It doesn’t matter if you are rich or poor, or if you live in a high-rise or a rent stabilized dwelling, you see them in your alley, running back and forth, engorging on the trash bags full of treats piled up on the sidewalk as if it’s a five course chef-inspired menu tasting, awaiting the garbage truck to whisk them away as if being picked up in their personal Uber car.  You encounter them in the subway as you wait for your train, as they are frivolously playing on the tracks, as if having their own underground playground. They are everywhere you turn your head. They aren’t hiding any longer, they are out and they are proud, as they are the rats of New York. Remember to stay vigilant, and by all means stay safe and avoid contact at all cost.

Built with WordPress | Protected by Akismet | Powered by CUNY